I was supposed to be picking up a few necessary groceries and heading back to my in-laws' house to pack for our trip home, but the Better Homes & Gardens "special interest" magazine caught my eye from an end-cap display and there I was, lost in 100 pumpkin recipes in the middle of September in a rural grocery store a thousand miles from my kitchen. You know how it is.

The second printing of 100 Best Pumpkin Recipes made the long car trip home with us and then sat quietly on my nightstand for a few months while we threw ourselves headlong into school. Flipping through it last night, past crumb cakes and pies, floats, breads, and cookies, I found a few intriguing soup recipes within those impulsively purchased pages. Since a quick Google search informed me that chorizo, which I always have on hand for rice and beans, was a fine substitute for the recommended andouille sausage, we found ourselves slurping pumpkin off our spoons less than an hour later. It could hardly be easier and uses mostly pantry staples. The following is the recipe as written in the magazine, but I found it held up beautifully to my tampering. I used more onion, chorizo, and regular barley, which I precooked before stirring it into the soup. I also added a can of cannellini beans. The flavor of fall in a bowl. 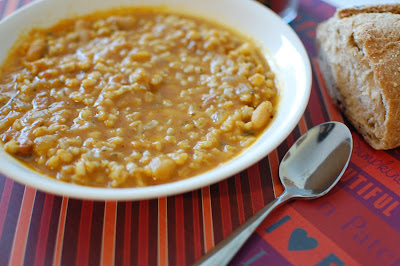