September is my birthday month, and I've always been partial to it.  The days of oppressive humidity are just about over, but the days of scraping ice off my van in the supermarket parking lot while three children kick melting snow off their boots onto the upholstery still feel like a long way off.  Pumpkin spice lattes aren't my thing, but I do look forward to tall boots, hooded sweatshirts, apples and apple cider, pumpkin baked goods, long simmering soups, walks through glorious foliage, and burning candles.  And cider donuts, which were a treat that went hand in hand with fall hayrides throughout my childhood, but which I rarely indulge in now.  I'm really looking forward to trying a cider donut recipe in my new donut pan, but since cider isn't readily available yet I had to break in the pan with something else. 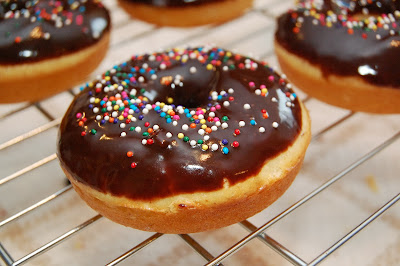 Yogurt IS readily available--we make our own--and it gives these cake donuts their tender crumb and a slight tang that reminds me of a sour cream cruller.  I've used yogurt and kefir as buttermilk substitutes in pancakes and other baked goods and that's what it replaces in this recipe too.  I've tried deep frying donuts but I typically burn the outside while the inside remains molten, and since there's no question about baked being healthier than deep fried, I think I'll be sticking with my oven and pan from here on out.  These were easy and fun--just what I look for when I'm baking recreationally.  The recipe makes 6, perfect for our little family as they're best enjoyed fresh. 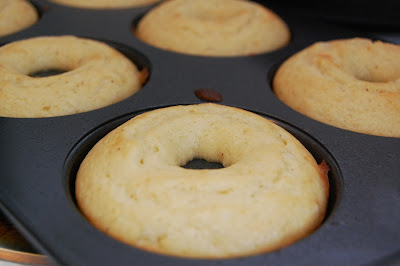 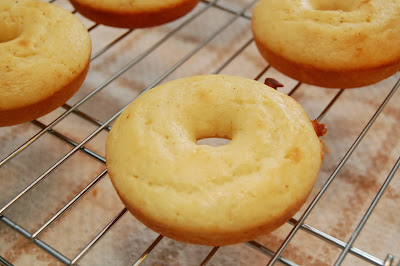 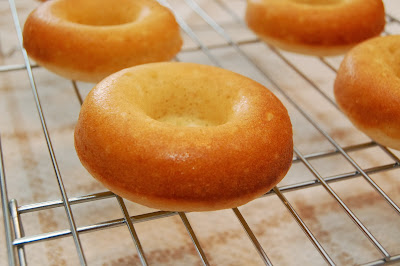 Sift together cake flour, sugar, baking powder, nutmeg, and salt in a mixing bowl.  Add yogurt, milk, egg, and butter and beat together until just combined.  Fill each donut cup 2/3 full.  Bake 8-10 minutes or until the tops of the donuts spring back when touched.  They'll be pale and just beginning to turn golden around the edges.  Let cool in pan 4-5 minutes before removing, then finish with a glaze, confectioners' sugar, or cinnamon sugar and serve. 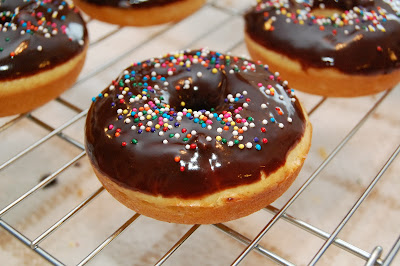 For a quick chocolate glaze, melt 1/4 c. semisweet chocolate chips, 1 T. of butter, and 1 T. of light corn syrup in the microwave on 50% power for one minute, stirring frequently until smooth.  Stir in 1 tsp. hot water to thin, and use immediately to glaze donuts. 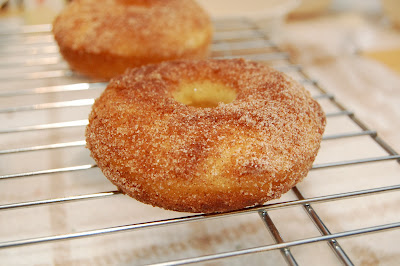 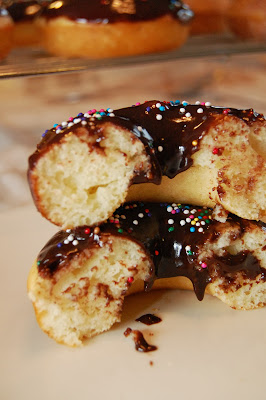 Just for fun, I ran a little nutritional analysis on this recipe using Calorie Count.  Major props to Dunkin' Donuts and Krispy Kreme for making all their nutritional information readily available.  I compared one of my donuts glazed with chocolate with Dunkin's Chocolate Frosted Cake Donut and Krispy Kreme's Chocolate Iced Cake.  Here's how they stacked up.  My donut's facts per serving (1 donut) are in blue, DD's are in orange, KK's are in green.

The moral is: donuts aren't health foods no matter where they're made, but homemade does have a huge edge over the chain places in terms of fat.  DD's also has HFCS, artificial flavors (in both donut and icing), several different kinds of oil, enzyme modified egg yolks (whatever that means) and preservatives.