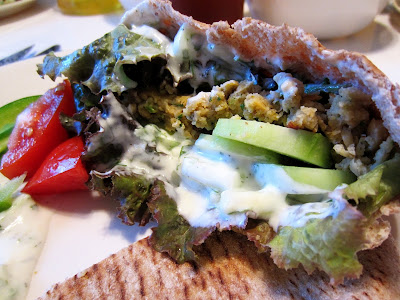 Falafel is everything I feel a summer supper should be--light, fresh, quick, easy, and it uses seasonal produce. I've adapted Sean's Falafel and Cucumber Sauce recipe slightly, subbing cilantro for the parsley in the falafel patties and adding some to the sauce as well, while cutting down on the dill and adding a splash of lemon.  If you hate cilantro, you might prefer the original, but I'm not a cilantro lover and do not find it offensive in this--it's just a fresh background note.  My husband called its addition to the sauce something along the lines of "brilliant" the first time I made it this way so I've done it ever since.

I'd just like you to know that every.single.time. I attempt to type chickpeas I inadvertently write chickenpeas and have to fix it. 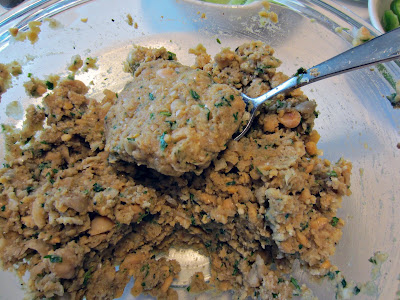 1. Mash chickpeas in a bowl until thick and pasty.  (The easiest way I've found to do this is to use the base of a plastic tumbler like a pestle; using a blender for this step creates the wrong consistency.)  In a blender or food processor, blend onion, cilantro, and garlic until smooth.  Stir into mashed chickpeas.

2.  Stir egg, cumin, coriander, salt, pepper, cayenne, lemon juice, and baking power into chickpea mixture along with olive oil.  Slowly add the breadcrumbs just until the mixture holds together (not sticky, not dry).  Form the mixture into 8 balls and flatten into patties.

3.  Heat oil in a large frying pan and fry the patties until brown on both sides.  Serve in warm pitas with cucumber sauce, lettuce, tomatoes, and extra cucumbers. 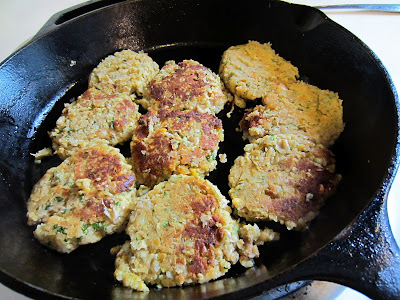 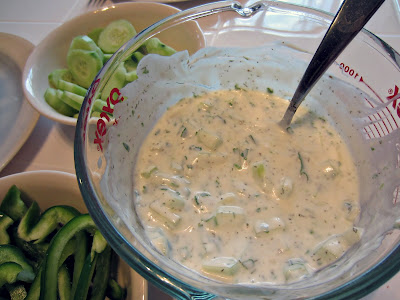 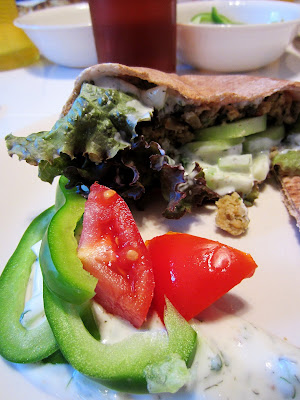 Our cucumbers came from our garden and so did the tomatoes.  Green peppers at 25 cents a pop at the Farmer's Market add some nice crunch. Store-bought pitas are more my style when there's so much else to do and the mercury is high, but because I already have my favorite pita recipe all typed up (for a blog I started but never really took off with), now seems to be as good an opportunity to share it as ever.

They require little active kitchen time, but there are two resting steps. I followed the wonderfully thorough directions found at The Fresh Loaf, which I'll summarize here.

Preheat your oven to 400 degrees. If you'll be using a baking stone, place it in the oven to preheat as well. If using a cookie sheet, you'll want to preheat that too.

Mix water, yeast, and sugar in a small bowl or measuring cup. Set aside for 5 minutes. In a separate bowl, mix the flour(s), salt, and oil (I used olive). When your yeast mixture is foamy, stir it into the flour mixture with a wooden spoon. The ingredients should clump together to form a ball, but if your mixture isn't wet enough, you can add more water a little at a time.

Turn the ball out onto a flat, lightly floured work surface and knead for 10 minutes. You could do this step with a dough hook or a food processor, but I found this dough easy enough to work with and enjoyed doing it by hand.

The dough should be stretchy, pliable, and homogeneous at the end of the kneading time. Form it into a ball and place it in a large greased bowl, rolling it in the bowl to coat the surface of the dough with oil on all sides. This will keep it from drying out as it rises. Cover with a clean, damp towel or plastic wrap and allow the dough to rise until doubled in size, about 90 minutes. Resist the urge to poke it during this time. Just walk away.

At the end of the rising time, punch the dough down in the middle to release some of the trapped gasses.  Divide the dough into eight pieces in whatever way makes the most sense to you; to insure relatively even pieces, I cut the dough in half with a sharp knife, and then in half again two more times. Roll each of the pieces into small balls and cover them again with towel or plastic wrap and allow them to rest for 20 minutes. This is a relaxing step, which they sorely need after being punched and hacked into pieces. Ok, actually, it's to make the dough easier to work with. 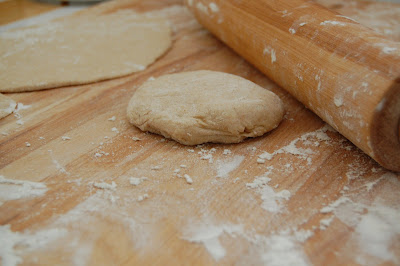 Now we get to the fun stuff. When 20 minutes is over, place the balls one at a time onto a floured surface and roll them into rounds approximately 1/8-1/4 inch thick. If the dough doesn't want to stretch, it needs to relax a few more minutes. 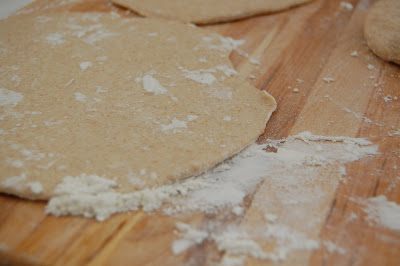 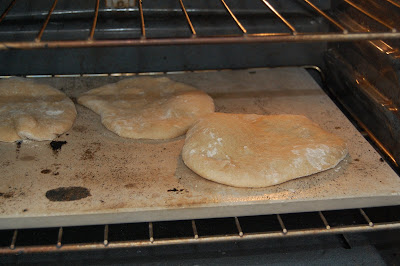 Place your rounds a few at time on your baking stone or cookie sheet and bake for 3-5 minutes until puffy and lightly browned in a few places. This is where they get their characteristic pockets. 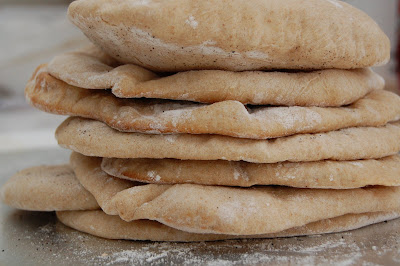 Remove your pitas from the oven and enjoy! Like most breads, they are best within the first 24 hours, but can be frozen for later use.
Labels: breads dinner meatless main dishes recipes vegetarian