My poor son has had a cold for the last week and a half.  Let me tell you, when you can't blow your nose (he's 21 months), you are pretty much at the mercy of this kind of thing to run its course.  His normal cheerful disposition and eat-anything approach to meals has been replaced by near-constant crankiness and rejection of everything except scrambled eggs and noodles.  Today I think he turned the corner though, and had a number of happy play times and even some giggles.  And, judging by the three helpings of rice and beans he had for dinner, I'd say his appetite has returned as well.

I turned half a head of kale into kale chips to eat with our dinner tonight.  They were fabulous in their own right...if you struggle to wrest something leafy and green into your loved ones, you gotta try it.  We don't really buy snack foods, but I'm hoping that kale does well enough in hubby's garden this year to place these chips alongside our grilled summer fare.

The other half of the kale had gone into this potato-based soup a while back.  It made a nice addition to our winter soup line up, was easy and quick to make, and had great flavor.   If you don't keep instant potato flakes around (I have them because they are a fair replacement for breadcrumbs when making gluten-free meatballs), which I used to bulk up the broth, you could change the cooking method: brown the sausage and remove it, then cook the onions, garlic, and potatoes as directed, then puree half of the soup prior to adding the kale and returning the sausage to the pot. 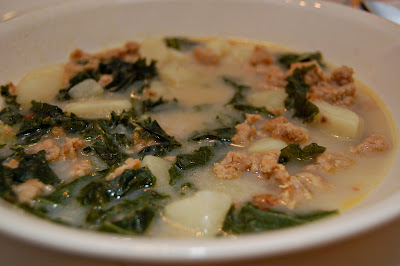 1.  Heat olive oil in a soup pot. Saute onion and garlic until onion is soft and translucent, then add red pepper flakes. Stir, then add sausages. Break the sausages up into bite-sized pieces as they brown.
2.  When sausages are cooked, add potatoes. Cook for 1 minute, stirring. Add broth. Bring to a boil, then reduce to a simmer and cover, cooking until the potatoes are easily pierced by a fork.
3.  Add the kale and simmer until wilted (8-10 minutes).
4.  Stir in potato flakes and heavy cream. Season to taste with salt, pepper, and herbs, and serve.